In time and with water, everything changes. ~ Leonardo da Vinci

I have lots of both – time and water – but don’t necessarily want to spend lots of my time delivering water to the garden. At first I was thrilled to see that the previous owner of my home had installed a faucet and waterline specifically for the garden. I attached my hose and the new fancy wand that Brad purchased for me and began watering everything by hand. Initially, watering a garden is easy. However once the plants begin to grow, watering becomes a delicate task as you need to avoid watering the foliage of many vegetable plants.  It only took a couple of days to realize that watering by hand took a tremendous amount of time. And when I get tight on time, I’m likely to skimp on watering! I needed another solution.

A few weeks ago, Brad and I went to the Myriad Botanical Gardens here in downtown OKC to take a two-hour class on water conservation. We did this because eventually we want to add irrigation lines to our yard so that we can have a nice grassy lawn. Turns out, this class had some lawn irrigation components but more than half of the class time was devoted to drip irrigation. I left the class knowing that I had the basic information necessary to install a drip irrigation system in my garden. And that’s exactly what I did!

I did a little more research during the week, and then following weekend I made my Home Depot run. I landed on a starter kit by DIG, and added the necessary supplemental parts. First thing Saturday morning, I began. By the end of the day, my irrigation system was in. I’m not sure you can see all the nuances from these photos, but let me direct your attention to a few key elements: 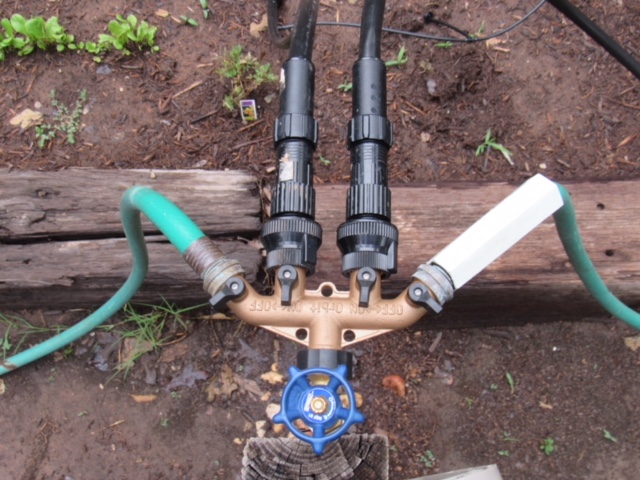 Hose Splitter – I initially started with a two-way splitter but quickly realized that I would need more capacity and switched to a four-way splitter. One regular green hose runs 100 feet across the yard to my blueberries. A second green hose runs to the wand because I still water the flower and herb pots by hand. The two black lines are the main drip irrigation hoses – one for each raised bed. 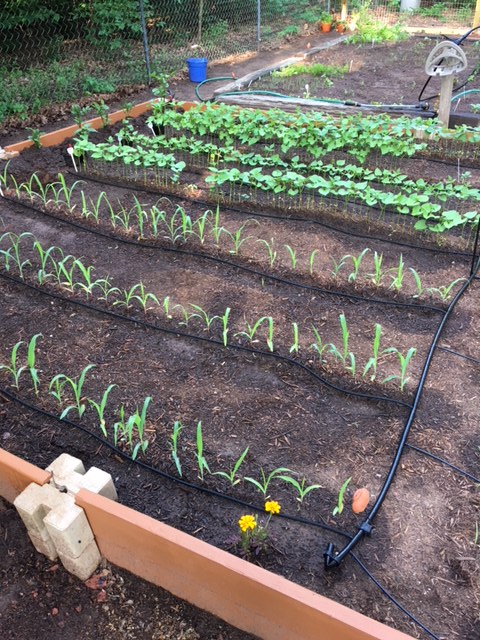 Soaker Hose – I didn’t know these were available through drip irrigation, but it is exactly the same concept as regular soaker hoses. It comes in 50’ sections that I cut to fit rows of vegetables that are growing closely, such as beans, peas, and corn. I also used it on rows like tomatoes where I have flowers in between the plants. This accessory puts out one gallon of water per hour. 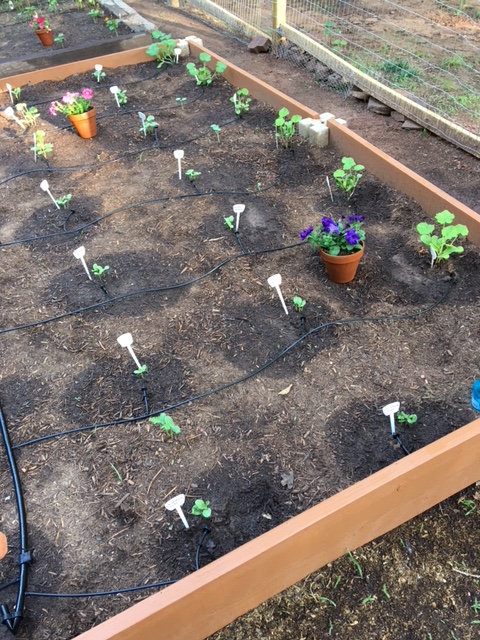 Drip Emitters – These emitters also put out one gallon of water per hour, but I am able to target the distribution. I directed these gadgets toward individual plants that need more room to spread, such as watermelons, cucumbers, cantaloupe, and pumpkins.

I did not add a timer to the system because I am concerned about how that works and need to take more time to investigate the mechanics. The faucet in the garden only works if I turn on the faucet at the house. I’m not exactly sure if I should put the timer on the garden faucet or the house faucet. And then I’m also nervous about having the pressure build up with the water turned on all the time. That may sound silly, but I truly have no experience with irrigation systems. I would rather be safe than sorry. Besides, it is simple enough to turn the water on when I wake each morning and turn it off an hour or so later.

I’m thrilled that the system was easy enough to install and now saves me tons of time each day. That’s precious time that I can devote to some new garden projects!

One thought on “Time & Water”