I met my father-in-law for the first time in 1991. He was 68 years old. His name was Loren. I don’t know that I ever heard anyone call him that. LA, Larry, or Pappa B – those are the names I knew. As some people grow older, they lose their filter and say just about anything, in any situation.  I’m not sure LA ever had much of a filter. Oh, the stories I could tell!

Both of Brad’s parents had the uncanny ability to be nonjudgmental.  I’m not sure that all of LA’s children and in-laws would agree. Brad is the youngest of five children, and I think his parents had relaxed quite a bit by the time Brad came around. LA always seemed to be pleased with my life choices. He passed away twelve years ago today. Even now, I find myself wondering what LA would have to say about my life these days.

Let me add a little perspective. LA’s grandfather was Wilhelm Detlaf Christian Bargholz. He was born in Oldenberg, Germany on April 15, 1865 (the same day that Abraham Lincoln died). Wilhelm migrated to America as a young man. He and his wife (Maria Schumacher) gave birth to Adolph John Bargholz on March 18, 1896. They were living in Clinton County – which is in eastern Iowa. After serving in World War I, Adolph changed his last name to Barghols and married Irene Schlichting. Loren (LA) and his twin sister, Lorraine, were born on September 23, 1923. (There was also an older brother, Verne, and a younger brother, Dave.)

LA’s parents were farmers. On land near Cushing, in northwest Iowa (Woodbury County), they grew mainly corn and soy beans. Their livestock included horses (to pull the plows), cattle, hogs, sheep, and chickens. LA’s chores were numerous. Twice-daily tasks included milking the cows and feeding the livestock. That translated to 5 AM and 5 PM, seven days a week, 365 days a year, through snowy, cold winters and blazing, hot summers. I think LA left the farm and moved to the town (nearby Holstein) just as soon as he was able.

Flash forward to today. I look at what’s going on around me. Craze. Trend. Movement.  All synonymous.  I read four articles before beginning this blog in an attempt to track the history of the local-food movement. Newsweek (November 2008), NY Times (August 2009), NPR (July 2013), Washington Post (March 2018).  Lots of good information but no linear timeline.  So, I don’t know how long it’s been going on, but I am here to say that I am all-in on one aspect of this movement – what author Christine Heinrichs refers to as the ‘mascot’ of the local food movement – the craze to have backyard chickens.

I wonder what LA would have thought about backyard chickens. He was not a fan of the chickens on his father’s farm. He thought they were filthy, gross creatures.  He is even quoted as saying that he thought he would have been a farmer if it hadn’t been for those “damn chickens.” Maybe there were a few other choice words in there as well. Today at the age of 95, would his stance have softened? Would he encourage me? Would he impart his wisdom? Would he scour the latest resources? I think the answer is ‘yes’ to all of those questions.

I am totally enamored by the concept of backyard chickens. But, I do have a tendency to take on more than I can handle. And – I haven’t convinced/worn down Brad and Delaney just yet.  Grayson and Cooper are on board. Cooper has even offered to help me build the coop. Even my brother, James – who lives here in Oklahoma City – is willing to help. But Brad and Delaney are another story. You’ve already seen my resolutions for this year. Bees made the cut.  Chickens did not.  Chickens have been pushed to the wishlist for 2020.

So in the meantime, I grab everything I’m offered in the way of information regarding chickens. For a craze/trend/movement that’s been around for 10+ years, it’s amazing that so many new books are still being published on the subject.

Last year, I reviewed Lifestyles of the Chicken Famous by Kathy Shea Mormino. I now follow her adventures on social media. Since then, I’ve been through several other books: 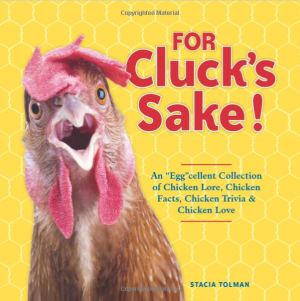 For Cluck’s Sake!: An “Egg”cellent Collection of Chicken Lore, Chicken Facts, Chicken Trivia, Chicken Love written by Stacia Tolman. While this is not a book that gives any advice about how to raise chickens, it is delightfully entertaining. It is full of interesting information. Facts. Quotes. Trivia. History. All accompanied by beautiful photography. LA would have thoroughly enjoyed this book. If he didn’t know the facts already, he would quickly learn them – and quiz his visitors relentlessly.

At the other end of the spectrum is 101 Chicken Keeping Hacks from Fresh Eggs Daily by Lisa Steele. I love this book! The overall design is wonderful. It is a delight to read. But more than that, the hacks seem to be the real deal. Of course, I have no practical experience yet – but her suggestions seem to be focused on saving money, providing the best for your chickens, and imparting a sensible perspective. I would love the chance to get LA’s opinion on some of these ideas – to see if he did something similar or if maybe one of these ideas would have changed the way he felt about raising chickens. I can definitely see me turning to this book time and time again when I finally get my own chickens. And I also now have Steele’s website marked as a favorite: FreshEggsDaily.com

How to Build Chicken Coops by Daniel Johnson and Samantha Johnson. Okay, I know you can go onto Pinterest and download dozens of instructions for building chicken coops. What I like about this book is that it tells you what you should consider before building: choosing the location (close or far from the house, maybe close to the garden), the ground conditions, sun, shade, and wind.  Also – instead of building a new coop, there are suggestions for converting sheds, playhouses, even doghouses! There are time-saving ideas for chores, a solar-powered door timer, and automatic waterers and feeders. Surely any one of these ideas could have given my father-in-law reason to reconsider his stance on chickens.

How to Raise Chickens by Christine Heinrichs. This book is not for the faint at heart. There is a lot of meaty detail here. If you are looking for a practical, step-by-step guide for raising a small group of chicken in your suburban backyard, I would say that this book is more than you need. It’s fascinating, thorough, and complete – but it is a lot of information that I think the average backyard coop keeper does not need/desire. There is a brief history of chickens, including breeding, culture, and art. There are details on the specific classifications and breeds. The origins of chickens are quite fascinating – but there are a lot of chickens from a lot of different places! There is an entire chapter on selection, breeding, and culling. And yet another chapter on showing – both eggs and chickens! All of this is followed by a chapter on health – and addresses diseases as well as parasites.

As I’ve noted before, my father is still alive but is in no real position to enjoy my gardening efforts. I wish I could share more of my adventures with him. The same can be said of chickens as they pertain to my father-in-law. I think we could have a blast together trying out some of these ideas. He would be right there with me – reading, researching, talking to the experts, and enjoying fresh eggs each morning – fried in real butter, of course. Rest in peace, LA. Rest in peace.