Ladybird, ladybird, fly away home
Your house is on fire and your children are gone
All expect one, and that’s Little Anne
For she has crept under the warming pan
~ Children’s Nursery Rhyme

My love of ladybugs continues.

Tuesday evening, I noticed that my yellow squash and zucchini plants were overrun with aphids. A quick call on Wednesday and I learned that I can purchase ladybugs at TLC Garden Centers.

On several occasions in Seattle, I have released ladybugs with my kids (thanks to The Grange in downtown Issaquah). Cooper has no memory of that. He and I were meeting after work to run an errand together, and then grab a quick bite to eat. Since he was going home before meeting me, I asked him to grab a small cooler and a couple of ice packs. He was surprised to learn that the cooler was for the ladybugs (they keep them in the refrigerator at the store) that I had just purchased. He was even more surprised to learn that I had purchased 1,500 ladybugs!

Once home, I gave the garden a quick spray of water (per the instructions). Cooper took time to review the packaging materials and discovered that the package of 1,500 ladybugs I purchased was an appropriate number of ladybugs to treat 1,000 square feet. He thought that sounded like an outrageous number of ladybugs for my little garden. Then he did the math and realized that my primary garden is 1,200 square feet!   Upon a little investigation on the supplier’s website I discovered that should I need to treat an entire acre, I should order the 72,000 ladybug package!

From the Tip Top website, I learned some other interesting tidbits as well:
• A female lady bug can lay up to 1,500 eggs over her 100-day lifetime.
• Eggs hatch into larvae in 5 days.
• One larvae can eat about 400 aphids until it becomes a pupa.
• One adult ladybug may eat over 5,000 aphids.

BEFORE. You might be wondering how well the ladybugs did in my garden. The picture below was taken at 7:30pm on Wednesday. Lots of aphids! 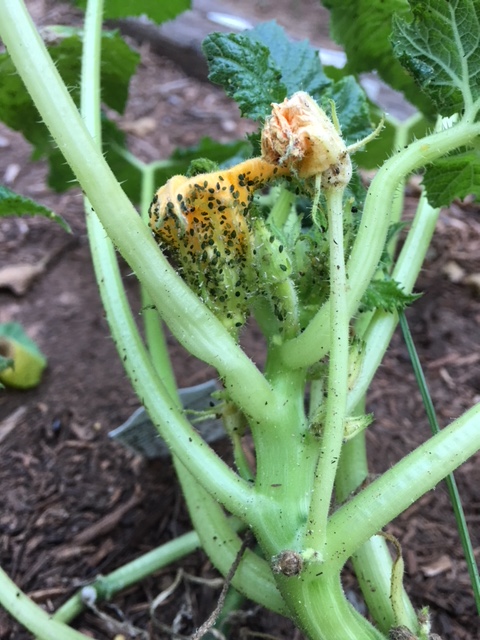 AFTER. This picture is the same plant just 11 hours later, at 6:30am on Thursday. Dramatic improvement!

All the photos in this post are taken in my own garden. No stock photos here. 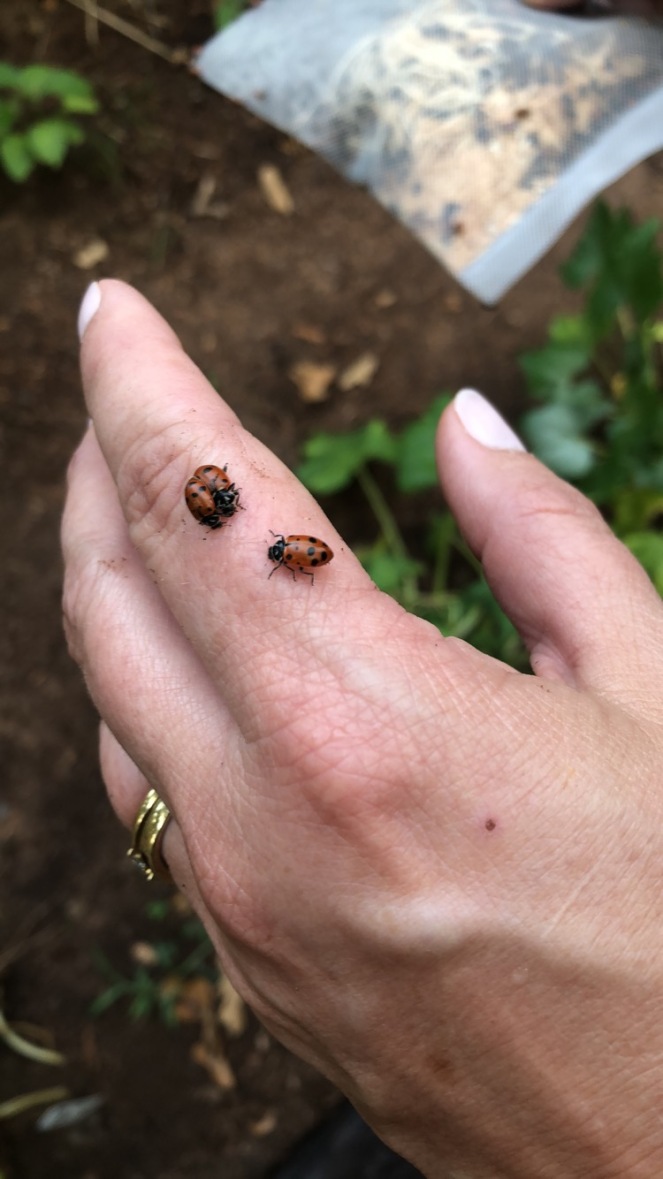 All this ladybug business piqued my interest and I decided to learn a little more about the cute little insect.  In a comment regarding a previous post, Jim Stephens (he lives/gardens in Cornwall and writes a blog called Garden Ruminations) notes that he can’t find an explanation for why they are called ladybugs here in the United States. Entomologists prefer the names ladybird beetles or lady beetles because these insects are not classified as true bugs. Ladybugs are part of the coccinellidae family, and this name is derived from the Latin word coccineus meaning “scarlet.”

The name “ladybird” originated in Britain where the insects became known as “Our Lady’s bird” or the Lady beetle.  Mary (Our Lady) was often depicted wearing a red coat in early paintings and the spots of the seven-spot ladybird (the most common in Europe) were said to symbolize her seven joys and seven sorrows. Do a quick Google-search for images of ‘European depictions of the Virgin Mary’, and you’ll be surprised to see how many have her dressed in red! Common names in some other European languages follow the British format. For example, the German name for ladybugs is Marienkäfer – which translates to Marybeetle.

In the United States, the name was adapted to ladybug, but I have no explanation as to why. One explanation said that it is an American custom to refer to all insects as bugs, and perhaps the name has just been changed from ladybird to ladybug to fit with this custom.

A common myth is that the number of spots on a ladybug’s back indicates its age.  In reality, the underlying pattern and coloration are determined by species and genetics, and simply develop as the ladybug matures.

Many cultures consider ladybugs lucky. The Turkish name is uğur böceği, literally meaning “good luck bug”. In many countries, including Russia, Turkey, and Italy, the sight of a coccinellid is either a call to make a wish or a sign that a wish will soon be granted.

I’m not particularly superstitious, so I don’t necessarily associate ladybugs with good luck. As I referenced in an earlier blog, ladybugs have come to represent encouragement for me. When I see one I am encouraged, assured that I am on the right path. Honestly, seeing a ladybug at a random time simply reminds me that God is in this – whatever this is. And with God, all things are possible.

Considering that I just released 1,500 ladybugs into my garden, I hope to be finding encouragement on a regular basis!